It’s hard for me to meet my father without us getting into a useless and irritating argument these days. It’s been two years since we last met. I’ve seen him three times since I arrived in Damascus. Now I realize how easy it is to be at peace with him when I’m away. I can love him then, even more than my mother. But once I’m here, I must remind myself not to be mad at him. When I talk to dad, it feels like I’m talking to Sultan Abdelhamid, or even Hitler. And what do you know; the old man is apparently a fan of both.

My father and I were very unlucky for getting acquainted during the worst periods of both our lives. I was just entering my teen years and had to cope with a new city environment, after having moved from Eastern Ghouta. I felt dislocated and estranged. My father had just retired from his long inspector career. He was lost, not knowing what to do with his life anymore. He felt as if he had been expired and got “put on the shelf”. That was the first time that we were given time to get to know each other properly. Ever since, it has been twenty years of mutual disapproval.

The age gap between me and the old man is 48 years. He’s 51, and 52 years older than my two half-brothers. The generational gap between us is even greater. My father grew up in a socialist industrial society. He played his part, expecting everyone else to do the same. He thought that in the end, the system he’d fought for would look after his interests. He was wrong. The system eventually collapsed on all of us – mercilessly.

“Corruption is what’s led us here,” he told me, commenting on the current state of war in Syria.

My father’s definition of corruption is rather narrow. It’s the kind of which you see at the German customs authorities. There, they hang a poster of a hand rejecting a bribe. For them, this is proof that their agents are incorruptible. Neither dad nor the German bureaucrats consider the big picture, though. Corruption according to them is the mere act of breaking the rules. They don’t seem to understand that bribes, tax evasions, and antisocial behaviors are often not acts of corruption but indications that it has already penetrated society. Sometimes we feel that the rules are only set for some social groups to victimize the others. Sometimes these rules are so rigged that the only way to seek justice is to break them.

Sometimes corruption is when we don’t.

After decades of defending Syria’s broken system, my father lost the battle against corruption. Instead of questioning the rules that he had fought for, he questioned the ones for which he had not. He has spent the last twenty years longing for an Ottoman past that had ended long before, when his mother was six. The old man seems to believe that the system began to fail when we gave up on the old rules.

“We need to restore to our true Islam,” he told me the other day. “It all started to fall apart when we gave up on it”.

Islam has never left Syria. If you ask me, it has long overdosed here. I find it hard to figure out this mysterious “true” component of Islam that my father keeps talking about. Perhaps it’s the Caliphate institution, which combined the spatial, the religious and the secular. My father is a fan of Sultan Abdelhamid because the latter both attempted to revive the Caliphate and refused to sell any lands in Palestine. Dad is a pan-Islamist who thinks that we lose ourselves when we move out of or give up on our lands. He thinks that Islamic identity politics is how we secure those lands. According to dad, the country will magically restore to its long-lost Ottoman glory when a new Abdelhamid arises. He wants me to return to Syria and just wait. This is how he expects me to continue his legacy.

“I have nothing against the Christians,” said dad. “I only have a problem with the Crusaders.”

My father’s picture of the world is straight black and white: Muslims v. Crusaders. He thinks that our problem is that we’re no longer “true” Muslims. Therefore, we’re losing this endless war to the Crusaders. It didn’t make it easy for my father’s generation when France’s Henri Gouraud entered Damascus, kicked on Saladin’s tombstone and said, “we’re back”. That was how the French both started and crippled the Syrian Republic.

As contrasted as his views of the world might appear, the old man’s definition of Islam is subjectively broad. It’s inclusive of everything he’s ever cared for. It excludes all that he’s ever detested. Despite his obsession with the Ottomans, my father has always taken pride in both his Byzantine Roman heritage as well as his Shiite religion. He doesn’t see any contradictions between these elements. He doesn’t see a contradiction between Shiite and Sunnite Islam either. Though, he rejects his father’s religion, the Bahai faith, as well as my Baathist mother’s Arab nationalism. He considers both beliefs to be attempts by the Crusaders and the Zionists to undermine the nation of Islam.

He’s a populist who cherry-picks from history and melts together contradictory components to establish an illusion of an empire. He points out the Crusaders’ otherness for his empire to have borders, otherwise it simply scatters. One component of the empire’s identity is that it doesn’t consume alcohol. This brings me to his admiration of Hitler.

As a child, I saw my father occasionally drink Syria’s national drink, Arak, with some of his Supply Ministry associates. The transparent liquor turned white whenever mixed with water, or ice. At the time, I didn’t bother to tell the difference between that and drinking yogurt. Until my father retired, he had kept several Scottish whiskey bottles in his closet too. Those were difficult not to notice (or try), when I moved back into his house in 2000. Yet, they all disappeared right after he retired. I don’t know whether that had to do with his retirement, or me moving back in with him.

As it currently stands, my father deems alcohol consumption immoral.

In his youth, he lived and studied for a short period of time in Dresden. The DDR somehow left a positive impact on him. When he asked me about Germany today, he had hoped for good news. He expected me to tell him that the Germans have had enough with the American influence over their country. I had to tell him that, sadly, the Germans agreed on a lot of bad things (such as noise pollution), but the American thing is something that divides them. I didn’t go as far as to tell my father that many Germans think of the Americans as liberators. That would break his heart.

“Hitler was a moral leader who didn’t drink”, my father told me. “That was not the case for Churchill”.

I looked it up. It turned out that Hitler – sort of – stopped drinking around 1942. Little does my father know about Hitler’s views on religion, though. The former German Führer thought of Islam as more suitable for his people than their “meek and flappy” Christianity. I think I will tip my father with this information, for it might make an old man a little proud and happy.

Somewhere in the Eastern Bloc 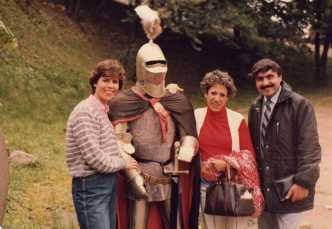 As for me, I now live with the Crusaders. I even married one of them – they really aren’t that terrible. They’re barely as bad as the rest of us, so it makes a little difference. They remind me of Syria before the war. I remind them of postwar Europe. We’re all corrupted and bankrupted, socially, economically and politically. We’re all corrupted by following the fatal rules.

We all suck, each of us in a different way.

One response to “The Roman Shiite Ottoman”